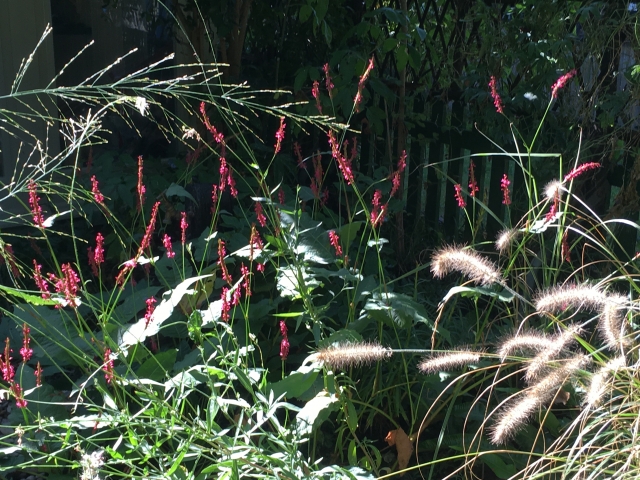 It may now be mid September, but in our heart it is still mid August, and we are in a romantic, languid mood. The reason: three gardens, we are currently designing, which have completely enraptured us.

The first, inspired by Frances Hodgson Burnett’s ‘The Secret Garden,’ was a brief to bring a ‘forgotten’ garden back to life. With trepidation, we ventured out into a huge garden hidden behind a basement flat in North London, to find a dense canopy of elders, entwined with holly; the ground, a sea of ivy: a dark and foreboding atmosphere. Having spent the morning sensitively pruning to allow islands of light to filter through, discovering hidden climbing roses, clearing patches of ivy to reveal fountain like ferns; the forgotten garden began to unfurl.

Having now returned to the garden and planted up some magnificent Polysthichum setiferum Proliferums, surrounded by Dropteris wallichianas, white tinged Athyrium nipponicum pictum’s, island beds of Digitalis, Astantia’s and Anemones,’ patches of Aquilega Blue Barlows and white spotted Hellebores, Rosa Bobbie James to climb up the trees; all that was needed was to add candle glass holders to hang from branches, a small fire dish for those snug autumnal evenings, and the enchanted garden was ready to cast its spell.

Our second garden looks really like a scene from a midsummer night’s dream. We love the idea that even as the evenings draw in, we should all still be out there enjoying the magic of darkened eve’s in our garden. Maybe the moment of mid-summer floral glory has passed; but still the whitest of pink Gaura and diminutive Bladder Campion mix in with Persicarias and the seed heads of alliums; Echinaceas entwine with Molinia caerulea ‘Transparent’ and billowing Bronze Fennels. And our favourite plant of all, the magical Penstemon very much holding court with it’s elegant glory. In this small garden in Kentish Town, we suggested that our clients place a wonderful old ornate brass mirror that wasn’t being used out in the garden to add depth, and a sense of wonder. A final touch – an old chandelier, strings of fairy lights, the sound of flute in the distance, a glass of homemade blackberry wine, and let the late summer night’s dream begin:

‘I know a bank where the wild thyme blows, where oxlips and the nodding violet grows, quite over-canopied with luscious woodbine, with sweet musk roses and with eglantine.’

The third garden we are currently designing is also somewhat of a forgotten garden in Islington. Very much a formal garden with brick wall beds and a crumbling stone walled surround, we set about with glee, bringing this garden back into it’s former glory. The brief from the client was to keep the garden formal and introduce a palette of predominantly purple and white, surrounded by walls of elegant roses.

Having persuaded our clients to let us drill into the concrete to create several new low herringbone brick walled beds, and given the garden a good two day clear up; the garden is now ready to plant. We are visualising next year’s purple and hues thereof show of Aganpanthus ‘Headbourne hybrids,’ Verbana’s, Perovskias, Cynara’s, and Salvia Nemerosa Caradonna’s, all inter-planted with the whites of Veronicastrum and Aquilegias and Lillies. All surrounded by climbing white roses, and peppered with the palest of pinks. All herbaceous perennials overlooked by a lovely Amelanchier lamarckii. All that’s needed is to add trailing Erigeron Karv and Campanulas out from cracks in stone and down stone steps, evergreens in the from of lavender, rosemary, thyme and ceanothus. Bring out a faded sage green/grey cast iron sage set of table and chairs, a steaming hazelnut latte, cinammon bun, and enjoy!

Penned by our own Debbie and available from our Hearticulture page.

When ex-fashion designer Deborah answers a knock on her door, little does she know that she is about to embark upon the growmance of her life ...

Handsome local MP Toby Knight persuades her to turn a patch of land outside her house into a food-growing project – with uproarious consequences.

Join in with Deborah, The High-Heeled Gardener, as she records her adventures in a worms-and-all diary. Follow her roller-coaster year of steamy sustainability, community transition, food growing and flirtation. From seedy Sundays and GM (gorgeous male) alerts to B-cup brassicas and exploding cucumbers, this is a heady journey from haute- to horti-couture.

Featuring a cast of cabinet makers and members, wassailers and wood nymphos, freegans and pot-laureates, Deborah is not only led up the garden path, but becomes an unwitting environmentalist along the way.

The High-Heeled Gardener is an hilarious horticultural handbook:

A year of digging dangerously!